Torey McMurdo’s story was that of an ambitious girl from a small farm town in Southern California, who wanted to make a difference in the world but didn’t quite know how. By the end of her four years here, her research had been recognized dozens of times by the national government, US and foreign officials and ambassadors, and the Central Intelligence Agency; but more importantly, by the end of her four years here, she felt utterly grateful to UCLA for “thoroughly wearing her out—and that’s a compliment.”

McMurdo grew up in a tiny rural town called Valley Center, located 40 miles away from the nearest large city. Nestled between two 1,000-acre ranches, she lived with her parents, brother, and sister. This childhood had endless unique aspects: she played water polo in irrigation ditches, drove 10 miles to the next-door neighbor’s house, and ran barefoot along dirt roads all day. Her parents placed an emphasis on traveling and discovering the true culture of the towns by doing things like riding mules through the backroads of Mexico. From this, McMurdo gained a deep understanding of many different cultures at a young age. She said, “They wanted to expose us to areas that make people uncomfortable. They wanted us to appreciate a place’s culture for its history, not just its nice beaches. That made me really interested in international affairs.”

McMurdo majored in political science and minored in public policy, but her real passion became national security. This interest came “from the strong sense of insecurity I experienced as a youth in San Diego, both in 2003 and 2007, when devastating wildfires ravaged thousands of homes and flung the city into full-fledged chaos.” After spending two birthdays of her childhood in an evacuation shelter and a house with no electricity, she had experienced personally how crucial security concerns were.

Then during her first year at UCLA, she shared a room with three Muslim women of Indian, Bengali, and Pakistani origin. “I recognized how misrepresented Islam had become in the United States because of 9/11 and felt compelled to invest myself in pursuits involving national security as a result…We’ve failed in this regard in a lot of ways since 9/11, so if I can play a role in rebuilding some of that trust and restoring some of our most respected values, then that’s a worthwhile and fulfilling pursuit for me.”

So, as a second-year undergraduate student, McMurdo set her aspirations high. She wanted to enroll in a class on U.S. national security policy—a class that was originally designed by Dr. Al Carnesale, UCLA Chancellor Emeritus with experience as past provost of Harvard University and dean of the Kennedy School of Government at Harvard. Public Policy Professor Dr. Amy Zegart warned McMurdo strongly against taking the class. She invited her to her office and gave her a laundry list of reasons why not to enroll. It would be mostly graduate students in the course, the workload would be too intensive, she wouldn’t have enough background knowledge to be prepared, etc. Yet, McMurdo said, “And so I thanked Dr. Zegart for her time and showed up anyway.”

This class proved to be a defining point in McMurdo’s college career, in which she learned how to truly learn and engage with the material. During the course, General Wesley Clark—former Supreme Allied Commander of NATO—came to the class as a guest lecturer to put on a seminar of crisis simulation and chose a student to serve as the president of the National Security Council. No matter how much McMurdo tried to hide behind others and remain unseen, General Clark called the terrified 19-year-old up to the front of the room. “I was totally unprepared, and I got absolutely grilled. I looked around the room and thought, ‘If this were a real crisis, the United States would be in an absolute disaster.’ That was a real turning point in my academic career here,” she continued. “Someday I did want to be in a position where I could brief people like him, where people could count on what I was saying. I walked away from that knowing what it feels like to potentially lead my country into disaster, so let’s avoid that occurring in the future.”

Taking this challenging class gave McMurdo the experience needed to take a position to brief government officials much sooner than she had anticipated. Less than a year later, she studied through the Center for American Politics and Public Policy, which sent students to Washington D.C. to work as interns. McMurdo worked in the Office for Egypt and Levant Affairs at the U.S. Department of State, but instead of doing menial tasks as an intern, she was writing policy briefs for Secretary Hillary Clinton by the end of her first week. At the end of the internship, she had written policy on important topics of international security for two presidents, the Secretary of State, the National Security Council, the United Nations, and the Assistant Secretary of State; she also co-authored a speech for U.S. Ambassador Condoleezza Rice. While this seemed overwhelming, McMurdo had been in simulated situations like this before, thanks to the class she took under Dr. Zegart and Dr. Carnesale: now it was just real life.

“In every possible way, I had the unique privilege of feeling, if only for a short time, the pulse of the world. But that all harkens back to my national security class. Dr. Zegart and Dr. Carnesale taught with exceptional purpose…For me, that absolutely made the difference in how I handled assignments at State, which is a real pressure-cooker. I realized, hey, I’ve already been grilled by a four-star general and two of the leading academics in the field, how much worse can it get? I went in with a lot of composure and confidence because it was so similar to what I’d learned here at UCLA,” she said.

From here, McMurdo went on to do more research for the Center for Middle East Development under Steven Spiegel, Defense and Diplomacy Analysis at the Roosevelt Institute, and various studies for Zegart such as China’s military evolution, at Stanford University during summer breaks, and at Walt Disney doing global and threat analysis.

She chose to write her honors thesis called Peace, Please: US Approaches to Nuclear 123 Agreements in a Changing Middle East, which Dr. Carnesale advised. The Center for the Study of the Presidency and Congress in Washington awarded her thesis a top prize, and findings from the thesis had been presented to countless government officials and ambassadors.

Doing research on the Middle East for most of her career inspired McMurdo to travel, so during the summer after her second year, she traveled to Cambridge University and did research on Anglo-US intelligence operations in the Middle East (which the CIA later solicited for publication). The following summer, she went to the West Bank and Jordan areas, visiting Israeli and Palestinian refuge areas. They met with more than 90 NGOs, refugees, and security administrators,with a goal of talking with half Palestinians and half Israelis. She explained, “It was a really eye-opening experience and made me realize how important seeing things first-hand is because it’s a lot different than reading policy about it. What really struck me is how institutionalized the poverty is. There were three or four generations that had lived in this refugee camp, and I think that that’s unacceptable on a human level.”

Seeing this poverty in the camps of both regions changed her focus when writing policy. “It made me realize that when I was at the State Department and I was making policy that was influencing this region, I really was very clueless about the policies we were making, how it affected the people. Now I try to be much more aware and open-minded. It catalyzed my thinking about how I approach other people’s perspectives, and it inspired me to pursue a well-rounded education,” she said.

McMurdo’s next experience would start just a week after the commencement ceremonies: Moving up to Palo Alto to work at Stanford. “Everyone told me, ‘Don’t move to East Palo Alto,’ because it’s a poor area. But I think it’s important for people in inner cities to see people with a UCLA sweatshirt walking down the street. They don’t need to feel detached from this world. So I got an apartment in East Palo Alto, which is not something I would have done four years ago,” she said. At Stanford, she has a position lined up to do research for the graduate school of business with Amy Zegart and Condoleezza Rice. “I have no doubt that Professor Zegart will keep me on my toes. It’s a great privilege to learn from people who are at the top of their fields. I really look forward to the challenge—the way to better those around you is by seeking out those opportunities that challenge you,” said McMurdo.

And after that? She would like to get a Ph.D. someday, although the details of that were not on the horizon as she graduated in June. McMurdo’s dream job would be to hold a cabinet-level position for the National Security Council. On a trip to D.C. to accept the award for her thesis, she was giving an acceptance speech when Secretary of Defense Leon Panetta started laughing as she spoke. Afterward, he asked her if she knew why he was laughing. When she said no, he replied, “Because I turned to my chief of staff and said, ‘Why is she up on stage? She should be working in my office.”

Although McMurdo’s individual path and astounding pre-graduation résumé reflected her own talent and work, she could not stress enough how much she owed to the university, to the state of California, to her professors, and to her peers. She especially attributed her success and mindset to her mentors Dr. Carnesale and Dr. Zegart, who she said made the difference in her college career. “From them, I’ve learned that success begins not with how you act, but with who you are,” she said. This lesson helped her to stay grounded through successes and focused on being of strong character through difficulties. 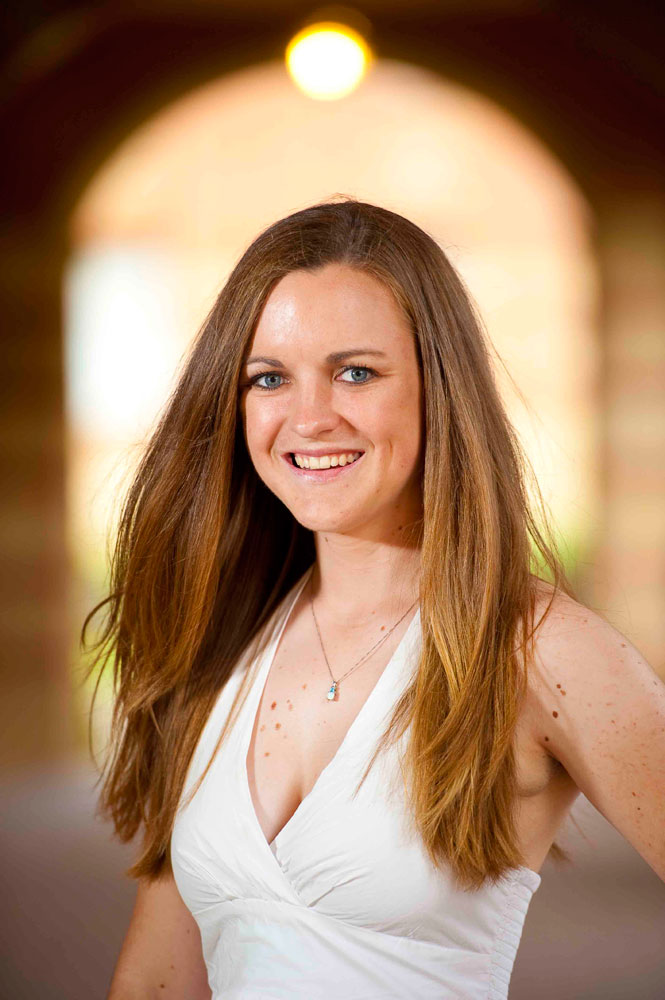 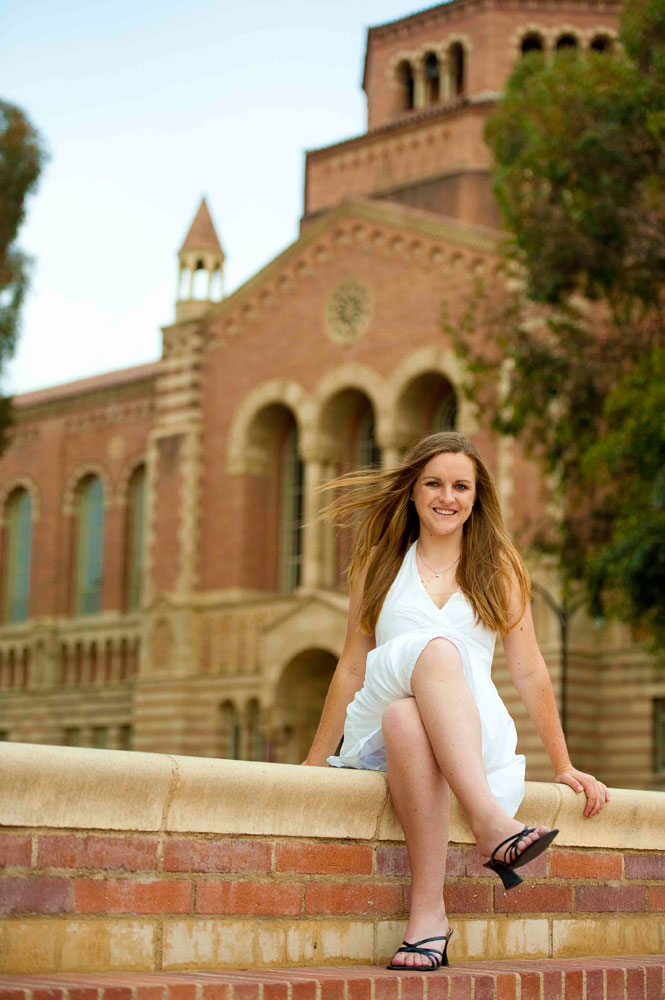 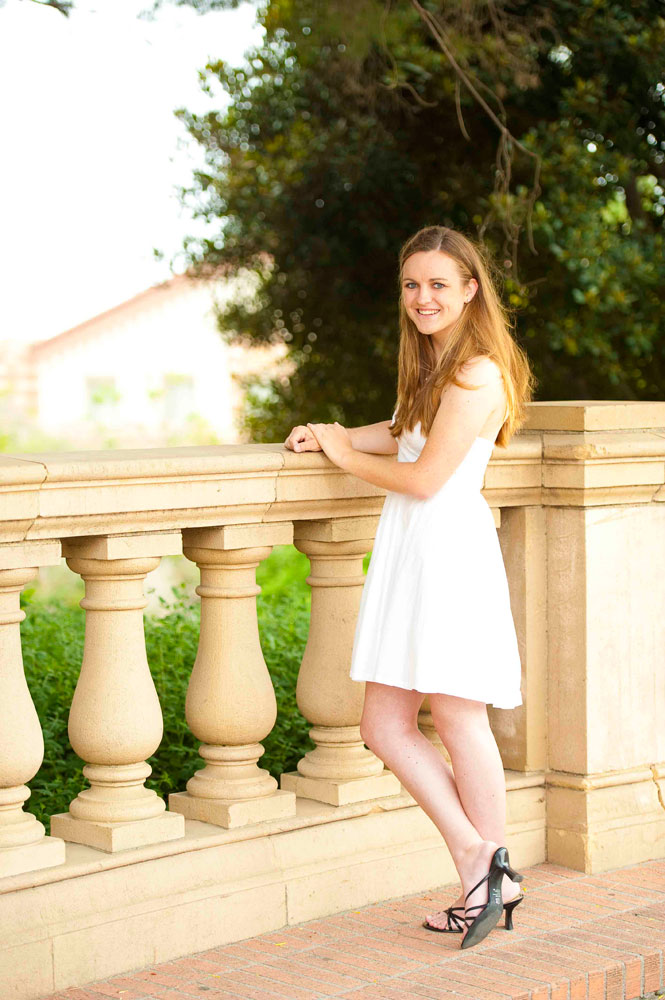