Latest Posts
Illustration Gallery: Fall Colors
Everything is not what it seems: A delve...
The best book recommendation based on your zodiac...
Slice of LA: A newcomer’s guide to the...
My biggest piece of advice for incoming students
A guide to UCLA’s writing resources
The 10 commandments for the school year
Los Angeles’ museums for your amusement
Fading campus lines
A weekend hike at the derelict Murphy Ranch
Student Life

As college students, it is often difficult to concentrate on anything other than our course loads, extracurriculars, and job prospects. We rarely have time to be bored. This school year, between an apocalyptic backdrop of the COVID-19 pandemic and the never-ending rigors of the quarter system, online classes gave some time back to the students, some of whom were able to revel in their boredom.

During my interview with Lulu Moore, a sophomore at UCLA, she shared her philosophy for life: “The thing that everyone should do with their lives is what they do when they’re bored, and if you don’t feel like you’re doing much when you’re bored, you should explore.” Lulu set the perfect sentiment for this prolonged phase of quarantine. When school was in-person, she would catch herself productively procrastinating by editing photos on Photoshop or “writing some bars down for a song because it felt good.” However, bogged down by her strenuous academic pursuits and “all the walking and craziness that is school,” Lulu was not able to fully explore her creativity. Now, she sees the time she’s been given as “a blessing to just kind of exist in [her] own space and do what [she] wants to do.” Through her boredom, Lulu was able to manifest her creativity through different artistic avenues and follow her journey of self-exploration and introspection.

At first, Lulu would find inspiration when discovering discarded, used furniture in front of frat houses and other off-campus housing. Donning their masks and gloves, Lulu and her roommate would take the furniture, disinfect them, and use the parts to create art pieces that furnished their backyard. Some of the finished pieces included a “Lil Uzi Vert table, a mirror made out of lights, and an American Spirit lamp.” Through this process, Lulu notes how she had to “understand how to work with different materials,” and while it was a feasible creative outlet during quarantine and break, “getting a really good piece requires expensive materials and it takes a lot of time.” Therefore, she reignited her passion for writing poetry. 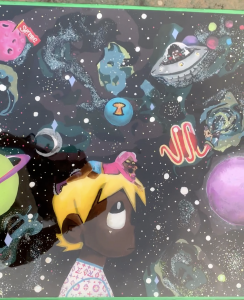 Art Made by Lulu Moore

When Lulu was younger, poetry helped her get through hard times, and she began to realize that “words change minds and minds change the world,” which is an essential element of her creative motivation. Lulu wants “to be a part of making the culture that shapes history,” and according to her, “art is a very underrated way to do that.” When I asked Lulu what her definition of art was, she responded by saying that art is “non-constricting, art is free and flowing.” While we often have the conception that art is only useful when validated by others, Lulu suggests that the art that she created for herself is what “inspired [her] to keep going.” Especially during this past year in the midst of the Black Lives Matter movement and the 2020 presidential election, Lulu discovered that what “keeps the momentum of hopefulness and spirit [in these social movements] is the artist.” To Lulu, “the state of the world right now [allows one] to look inwards and be introspective for once,” and as an extrovert who would often “fill up [her] time with everyone else,” she used this time to become her “own best friend.” Moreover, she discovered through quarantine that this introspection stemmed from art and its role as a companion to whom she could “express herself.”

As Lulu manifested her creativity with this newfound time, she realized that she was no longer headed in her original direction and changed her major from political science to communications and African American studies, thus forging a new path for herself. Lulu stated that “for the first time, I felt like I was creating instead of absorbing,” and like many others who were “more honest with themselves” during this time, she believes that this year encouraged her to truly find and be herself.

5 Ways to Stay Active in LA