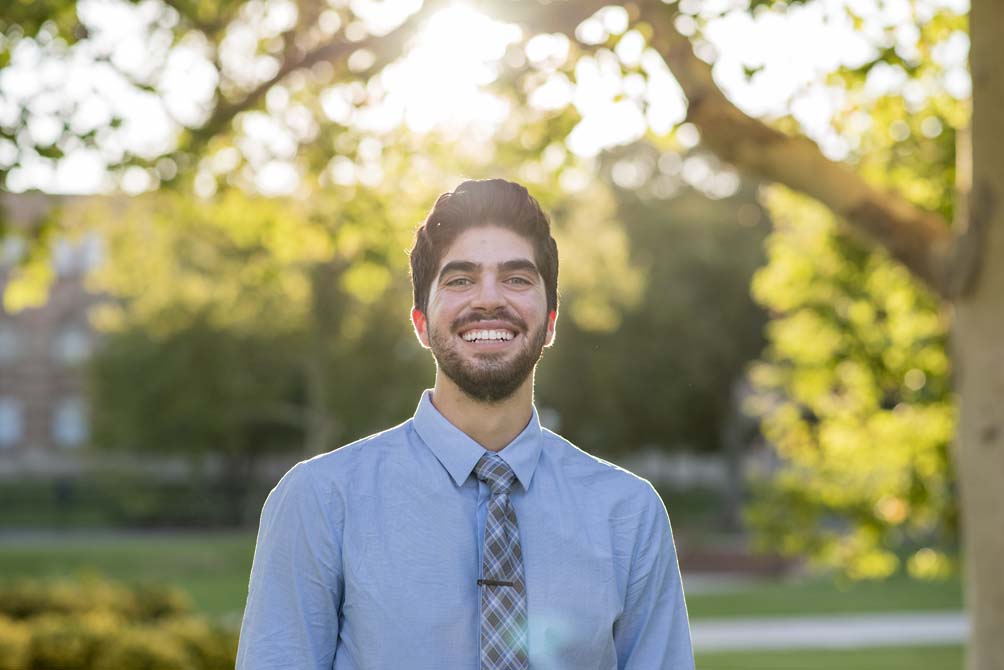 Evan Lovell was constantly reminded of the phrase “Champions Made Here,” as he spent many early mornings working the opening lifeguard shift at UCLA’s North Pool and the Spieker Aquatic Center where this slogan was proudly displayed. For Evan, the phrase rings true to his journey and accomplishments at UCLA on a personal level.

His Grandma once referred to him as “zesty and sharp.” For Evan, this was a perfect indication of his “friendly nature that stems from him wanting to make people feel welcome and comfortable around him.” It’s important to him for other people to know that he is as great at being thoughtful, supportive, and a listener as he is extroverted.

Coming from a rural town, Evan’s exposure to the diverse student body was met with a desire to “learn from [the] wide range of beliefs and opinions” hosted on campus. Evan developed an open mindset to his coursework and his curiosity drove him to explore subjects he never would have encountered before, ranging from political communication and advanced game theory to journalistic censorship and American folklore. He not only approached his studies with sincere eagerness, but he also carried this enthusiasm into “relationships outside the classroom that greatly contributed to [his] individual growth and social refinement.”

“Whether it be advising passionate student government leaders, or consoling a freshman through his third break-up of the quarter, many of my jobs relied upon empathy and interpersonal skills,” said Evan.

Through his work as a resident assistant and a UCLA CUB tour guide, Evan cultivated his interpersonal skills and his ability to effectively problem solve. Evan’s experience with Cub Tours, “an organization that gives weekly campus tours to groups of children from low-income schools,” was so rewarding that he began “helping with the recruitment of future Cub Tour Guides and successfully brought in several new members.” However, as the President of UCLA’s Pre Law Fraternity and the director for the Mock Trial, Evan’s “patience and capacity for conflict management was constantly tested but considerably bolstered,” largely due to his role in “deescalating tense debates between fiery pre-law students.”

The level “empathy” that Evan developed from his experiences on campus were carried forward into his workplace. During his internship at the Supreme Court and his employment at the Sacramento DA’s Office, Evan was further “inspired by the passion, empathy, and tact displayed by the attorneys.” At the Supreme Court, Evan “had the opportunity to attend the historical case regarding LGBT discrimination in the workforce” and was able to witness “the prioritization of human connection and support” that further drew him into the field of Law.

Based on his experiences and time at UCLA, Evan has come to believe that individuals are often most successful when they choose a position that utilizes their strengths and interests. This philosophy has provided him with the clarity of being sure that he’s on the right path to pursue his passion for helping others. Acts of passion and empathy not only appeal to him, but have inspired Evan to engage in it.

Although he is not certain what the future holds for him post law school, Evan will focus for now on attending Berkeley Law where he hopes to continue to champion his “dedication to service and passion for working to support others.” As the 2020 Recipient of the Chancellor’s Service Award, Evan’s vision seems natural and well within reach.

At the end of his undergraduate degree, Evan exclaimed that “time flies when you’re having fun,” and it sure was an “untraditional ending to virtually the greatest of all time.”