Latest Posts
Illustration Gallery: Happy Holidays
Illustration Gallery: Fall Colors
Everything is not what it seems: A delve...
The best book recommendation based on your zodiac...
Slice of LA: A newcomer’s guide to the...
My biggest piece of advice for incoming students
A guide to UCLA’s writing resources
The 10 commandments for the school year
Los Angeles’ museums for your amusement
Fading campus lines
Lifestyle

You’re walking back from class when you pass by Kaufman Hall. Up ahead, you see a large crowd of students, some of whom appear to be crouching in the bushes right outside the building. Every one of them has their phone out, taking pictures of something not yet visible to you. You think to yourself: who could it be? What is all this fuss over? It must be someone famous, someone important. As you work your way through the crowd, you come to a clearing. You look down, only to see … a cat. 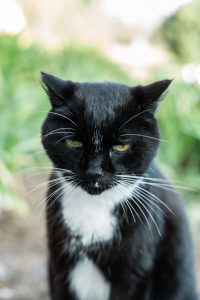 This scene is one that is familiar to many in the UCLA community.

Maybe you first stumbled across the friendly feline while walking past Kaufman Hall, or you heard about them from a friend, or perhaps you discovered them on their increasingly popular Instagram account. Since Powell Cat’s arrival on campus in 2015, they have become an instant fascination with students and staff alike, capturing the hearts and minds of the UCLA community.

So, what makes this cat so beloved?

In a large school like UCLA, where one can easily feel lost in the crowd, Powell Cat makes you feel special. A chin scratch here, a belly rub there — Powell Cat offers students a small moment of complete and utter joy with a sincerity that only an animal can bring.

Powell Cat has also become quite the campus celebrity, often seen posing for photos with students and frequently being surrounded by a large group of people, all jumping at the chance to meet the famous animal.

And, while you may be familiar with Powell Cat, you likely do not know this cat’s full story and all the people who have taken care of them along the way.

First off, the fluffy friend we know today as Powell Cat is not the first campus cat to grace the grounds of UCLA. In 2013, the original Powell Cat was a feral tuxedo cat dubbed by librarians as “Library Cat,” who often spent her time in the Powell Library rotunda or atop the reading room book stacks. The Library Cat was later adopted by Vicki Steiner, a reference librarian at the UCLA Hugh & Hazel Darling Law Library.

Additionally, there have been hundreds of feral cats that once called UCLA home. A program was established in 1989 to keep the growing feral cat population in check and since its founding, the number of stray cats has been reduced from “350 in the 1980s to about 10 today.” The program utilized the trap-neuter-return method, in which the stray cats picked up were taken to a veterinarian to be spayed or neutered, and then either adopted or released back to where they were found.

The current Powell Cat was first spotted near Powell Library in the summer of 2015 and inhabited Bruin Walk for some time, but they have since relocated to Kaufman Hall and can be observed there regularly. Located behind the steps of Kaufman is a permanent food and water area for Powell Cat, which is maintained by the Campus Cat Network and student volunteers.

Kathy Brown, who has been the executive assistant to the university librarian since 2013, is one of Powell Cat’s main caretakers. Kathy has been a fan of Powell Cat since first meeting them, and she has gradually become one of the cat’s two human assistants, along with UCLA alumnus Alaina Dexter. Together, they manage the popular Instagram account @powellcatofficial.

At the start of the COVID-19 pandemic in March 2020, the account had reached 2,000 followers. But as the pandemic progressed and students were unable to return to campus, Brown noticed a huge uptick in followers on the account. “I think that students and all of us were just feeling so isolated and wanting to make a connection to each other and back to campus, and Powell Cat (was) one way of doing that,” said Brown. The follower count has since exceeded 8,000 people, clearly indicating the campus-wide love for the photogenic feline.

In August 2021, the Powell Cat Instagram account posted a request for volunteers to help with providing Powell Cat’s food and water on a scheduled basis since students were allowed to return to campus. The post received a great response, with dozens of students messaging the account looking to become volunteers.

Once students were allowed back on campus, they were excited to see their furry friend at Kaufman Hall and were eager to help meet Powell Cat’s needs. A large number of these volunteers were incoming UCLA freshmen, many of whom had never met Powell Cat but were motivated to establish a connection with this campus celebrity.

Taylor Simonich, a first-year political science major who has three cats of her own, said she volunteered as a caretaker because Powell Cat provides her the familiarity and comfort of home.

“It’s rewarding to be able to feel like I’m helping, especially with animals,” said Simonich. “I’m an animal person, so I have a soft spot in my heart for them, and it’s nice to be able to give back.”

Jenni Dabbert, a fourth-year ecology, behavior and evolution major, also owns cats and has experience working at a volunteer center with cats and kittens.

“I actually started bringing (Powell Cat) food and water every day before this volunteer program was established,” said Dabbert. “So, when I heard about it on Powell Cat’s official Instagram, I hopped on it immediately.”

But perhaps the most touching part of Powell Cat’s story is how so many people in the UCLA community have come together to support this animal.

For years, Brown and the Campus Cat Network had been feeding Powell Cat from a large white cat food bin located just outside Kaufman Hall, but no one knows who first created it.

“Some secret benefactor has been filling that bin with dry food for Powell Cat for several years,” said Brown. “I filled (the bin) last time, so it’s possible whoever was filling it has moved on from campus, but … it’s a mystery to me.”

In May 2021, Brown and Dexter decided it was time to take Powell Cat to the vet for a full feral cat checkup, including all necessary vaccinations. Brown had already chosen to pay the vet bills herself, but, after posting an update to Instagram about the trip to the vet, many people messaged the account offering to help cover some of the costs.

Brown and the other Powell Cat volunteers decided instead to create a GoFundMe page, which reached its goal of $400 in about three hours. They even had to shut the account down because they were receiving too many donations from so many people, said Brown. “People were very eager and very glad to give a little bit to help take care of Powell Cat, which was so nice and so generous.”

But, if Powell Cat was already neutered before coming to UCLA, that begs the question: Where did Powell Cat come from? Did they have a home or a family?

We may never know where Powell Cat came from or the story leading up to their arrival on campus, but we do know that Powell Cat has chosen UCLA as their forever home — and has also chosen the UCLA community as their family.

A Bruin’s guide to electric scooters

From strangers to roomies

The international student experience amidst the pandemic