Throughout the pandemic, many students have explored a variety of newfound passions and creative outlets. In many cases, these outlets unlocked new hobbies that enabled students to embrace their individuality. Painting, cooking and singing are just a few of the activities Bruins participated in during quarantine.

Joseph Lee, a first-year student at UCLA, shares his own quarantine hobby of painting and the various sources of inspiration he found for his projects: “I started painting and rediscovered the joy that came with it.”

Expressing how he was inspired by nature, Lee continues, “I had this weird fixation on trees and painted a lot of trees.” He also notes that a large contribution towards this focus on nature was caused by the alienating experience of isolation and restrictions that inhibited physical interaction with other people.

Aside from trees, Lee also painted a Keith Haring-inspired mural on his bedroom wall. He wanted to paint this mural not only as a fan of Haring’s work, but also because of his realization that artistically replicating realistic people is an extremely difficult process. “I think that within painting, drawing people is hard,” Lee states, “and the stuff I did was very simplistic – I wasn’t very good at it.” 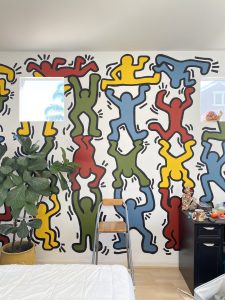 Overall, painting for Lee was an enjoyable quarantine hobby that enabled him to experiment with something new. While he said it is not something he would seriously pursue, this creative endeavor allowed him to access his creative side and have fun without the expectation of perfection.

Another first-year Bruin, Raine Torres, embarked on further creative endeavors that included cooking, exercising and making music. “I had a short-lived phase where I would try to work out,” Torres states, admitting that her efforts to consistently exercise were fleeting. Despite the end of this phase, Torres’ workouts did impact her later on as she joined tennis and gymnastics groups at UCLA as a continued hobby.

Torres additionally tapped into her creative side through cooking. “My mom and I experimented with different meals,” Torres states, “and I tried baking a lot of stuff and making lots of drinks.” While living on campus is an obstacle for Torres to continue to experimenting with cooking, she notes that it is one of her central pastimes whenever she returns home. 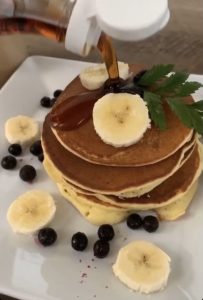 One specific project of Torres’ demonstrates her greatest talent and passion: making music. “Because of quarantine, I had more time so I would work on music a lot more,” she states. Although Torres began making music before the pandemic, the duration of quarantine presented itself with a seemingly endless void of creative space and encouraged her to continue pursuing music.

Like Lee, Torres focused on having fun while trying some new activities. However, she also notes that the final products of her projects were ultimately the most rewarding aspect of her quarantine hobbies. Whether it was a new meal or a completed song, the outcome of her pursuits provided the most satisfaction.

5 comfort foods to make in your dorm room

Top 5 spots to nap on campus

Making every dollar last in Westwood

The importance of Black History Month