Latest Posts
Illustration Gallery: Fall Colors
Everything is not what it seems: A delve...
The best book recommendation based on your zodiac...
Slice of LA: A newcomer’s guide to the...
My biggest piece of advice for incoming students
A guide to UCLA’s writing resources
The 10 commandments for the school year
Los Angeles’ museums for your amusement
Fading campus lines
A weekend hike at the derelict Murphy Ranch
Commentary

COVID-19 vaccinations are no joke

Casual Jewish-jokes are definitely a fresh approach for SNL, but hey, it hasn’t exactly been a comedy show since Tina Fey and Amy Poehler. 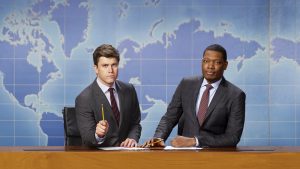 The rollout of vaccines to fight COVID-19 is an opportunity for the world to work together across nations and bridge economic divides. The vaccines have been limited in quantity and use relatively novel technology, which has led to ethical issues about how to distribute the shots and how to reassure the large numbers of vaccine skeptics in every country.

One unhelpful way to address these issues is through racist jokes, which is what SNL performer Michael Che attempted on the February 20, 2021 episode during its Weekend Update. In reference to the world’s leading vaccination program, Che quipped, “Israel is reporting that they’ve vaccinated half of their populatio; I’m going to guess it’s the Jewish half.” The objections swiftly came in from many corners and rightly so, because anti-Semitism is never a good look.

Since the quip is so brief, it’s hard to know exactly what Che is referring to. Israel, the most democratic of the Middle East nations (you are not going to find Christian and Jewish members of parliament among Israel’s neighbors, while there are about a dozen Arabs who are current members of the Knesset), has a large Arab population, of which 59% of those above the age of 60 were vaccinated by the end of January. It does not seem that any other nation, including ours, has achieved that rate of vaccination for any ethnic or religious group.

Che may not be aware that one reason for these high vaccination rates in Israel is the country’s agreement to partake in a study of the Pfizer-BioNTech vaccines. It paid a premium to secure a full supply of the vaccine and to use its modern health care system and relatively small population to track Israelis and provide Pfizer with data. This huge human experiment has already yielded so much useful information, such as the effectiveness of a single shot, whether ultra-cold storage is really needed, and the relation between shots and rates of infection.

If Che is referring to the Arabs living outside of Israel in the Palestinian territories of Gaza and the West Bank, it has been repeatedly reported that under the Oslo Accord, the Palestinians are responsible for their own health care, and more importantly, they did not ask Israel for vaccines and instead turned to other nations, various manufacturers, and the COVAX program under which about 92 countries will receive vaccines for free through the World Health Organization (WHO)-led initiative. Only when distribution under COVAX turned out to be slow did the Palestinian authority ask Israel for vaccines, some of which have been provided. In fact, Israel and Russia were the first nations in the world to provide vaccines to the Palestinian Authority.

The issue of disparity in vaccine rates between Israel and the Palestinian territories is not going to be resolved by looking at it as an Israeli issue, because it is equally the issue of other rich, technologically advanced countries. Big Pharma in wealthy countries own the patents on the vaccines, and wealthy nations like the United States, Japan and those in the European Union have refused requests by nations, like India, to release the patents that would permit other countries to manufacture the drugs royalty-free. As a result, vaccination rates are significantly higher in all wealthy countries. This is an ethical issue of the equitable distribution of vaccine resources that requires us Americans to look in the mirror and not make scapegoat jokes about others.

And wealth divisions are not the only problem. Many people are suspicious about jabs produced by richer countries. As a headline in the Christian Science Monitor put it: “Israel is a vaccination leader, but it labors to reach Arab citizens” because of their mistrust of the government and “their doubts about the COVID-19 vaccine.” In fact, in the West Bank, leaders have shied away from the Pfizer drug to an extent for its American and Israeli connotations, preferring instead the AstraZeneca and Russian Sputnik V vaccines. Showing the political overtones of the choice of vaccine, neither of those vaccines is approved by the FDA for use in the U.S. Furthermore, regardless of brand, there are anti-vaxxers in significant numbers around the world, leading Queen Elizabeth to release a public service announcement encouraging British subjects to get the vaccine for the sake of others.

During times of pandemic, scapegoating is not uncommon. In medieval times, Jewish ghettos were less affected by the bubonic plague because of ritual hand washing, cultural practices of sterilization (good hygiene), and relative isolation. Superstitiously blaming healthy Jewish people for the illness that afflicted them, nearby villagers would torture Jewish families or burn their homes for “cursing” and “poisoning” village drinking wells. Anti-Semitism never goes away. Anti-Semites criticize Jews or Israelis both when they do something wrong and when they do something good, like vaccinating more effectively than any other government. In fact, in 2018, The Daily Bruin reported the vandalism of a mezuzah at UCLA.

A more heartwarming story in this vein came this week when Senator Cory Booker questioned Merrick Garland, President Joe Biden’s nominee for attorney general, about his motivation for serving. Garland tearfully recounted, “I come from a family where my grandparents fled anti-Semitism and persecution. […] I feel an obligation to the country to pay back for protecting us.” Both Republicans and Democrats are supportive of Garland’s testimony and nomination. No jokes. No petty prejudices. A similar sympathetic approach to the distribution of COVID-19 vaccines is what we need to promote the equitable sharing of resources.

Saving the planet for its sake, not ours

Fast fashion is out, sustainability is in

My commencement speech to you

Purple line extension will bring subway to the...

UCLA needs to roll out the welcoming committee

A New Transfer Student’s Perspective About Coming to...

Keeping up with the quarter system

How capitalism and the blissful ignorance effect are...